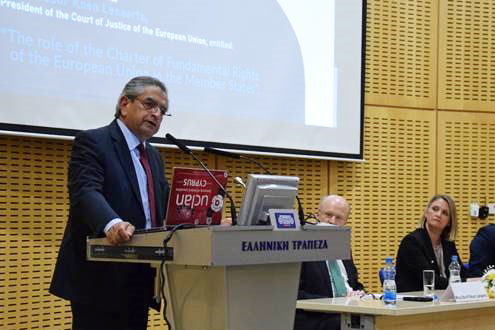 The Cyprus Campus of the University of Central Lancashire (UCLan Cyprus) is pleased to announce that the Hon Mr Justice Costas Clerides (Ret’d) is to receive an Honorary Doctorate in recognition of his significant contribution to society, to higher education and to the discipline of Law.

The University of Central Lancashire (UCLan Cyprus) would like to place on record the twin facts that a decision has been made to bestow this Honorary Degree upon Mr Justice Clerides and that he has graciously accepted it.

Mr Justice Clerides was born in Nicosia in 1952 in the then British Crown Colony of Cyprus.  After graduating from the Pancyprian Gymnasium in 1970, ten years after the establishment of the Republic of Cyprus, he served for two years in its National Guard.  Thereafter, he read Law in London and was Called to the Bar at Middle Temple.

Upon his return from London to the Republic of Cyprus, he spent a decade in private practice in the law firm Lefkos Clerides & Sons, which was established by his father, another distinguished lawyer, but of a previous generation.

In a sign of his commitment to civic duty, the then Mr Clerides was elected to the committee of the Nicosia Bar Association, on which he served for a number of years.  Moreover, he had a stint as General Secretary of the same Association and published articles on a range of legal and social issues.

Particularly during his tenure as Attorney-General, Mr Justice Clerides visibly strove to uphold the rule of law, the proper administration of justice and the independence of his constitutional office.  He did so in exceptionally difficult circumstances.   During his term of office, he appeared before the Supreme Court in various legal proceedings of vital importance on behalf of the Republic or the President of the Republic and he represented Cyprus before the European Court of Human Rights in Strasbourg, the International Court (ICJ) in the Hague and before the ICSID Arbitration Court in Paris.

Since 2015, he has been the President of Nearchos Clerides Cultural Foundation and as from September 2020 a Board Member of A. G. Leventis Foundation.

In addition, he has been visibly active in support of legal education across the universities of the Republic of Cyprus.

To take one example, at the University of Central Lancashire Cyprus (UCLan Cyprus), Mr Justice Clerides was a regular attendee at its annual Law Lecture and Dinner.  Indeed, he delivered the Inaugural Lecture at the Annual Dinner held on Friday 12 May 2017.  He focused on ‘The role and the powers of the Attorney-General in Cyprus’.

To take a second example, Mr Justice Clerides delivered the Opening Address, on the subject of ‘The Charter of Fundamental Rights of the European Union in the Member States’, at a seminar held in Nicosia in honour of the Key Note Speaker, Professor Koen Lenaerts, President of the Court of Justice of the European Union.  The seminar was jointly organised by the University of Cyprus and UCLan Cyprus. Mr Justice Clerides was tasked with introducing the key-note speaker and highlighting the importance of the topic for the Cyprus legal system.

For these and for other reasons which will be set out in the Citation to be read out at the forthcoming Graduation Ceremony, it is fitting that the achievements of Mr Justice Costas Clerides should be recognised by means of an Honorary Doctorate from the University of Central Lancashire.

The Cyprus Campus of the University of Central Lancashire (UCLan Cyprus) is therefore pleased to announce that the ceremony, will take place in person at UCLan Cyprus on Wednesday 30th March 2022 at 15:00 pm. A light lunch will be offered at 14:00, subject to COVID-19 measures in place at the time. We hope to receive your registration for this event.

We look forward to welcoming you to celebrate this event.

In order to register for the event please send an email to: lawacademy@uclancyprus.ac.cy or call 24694048 or wait to hear back from us with the formal invitation.

Upon registration, you will receive the full programme of the ceremony.

You can read the relevant press release here.