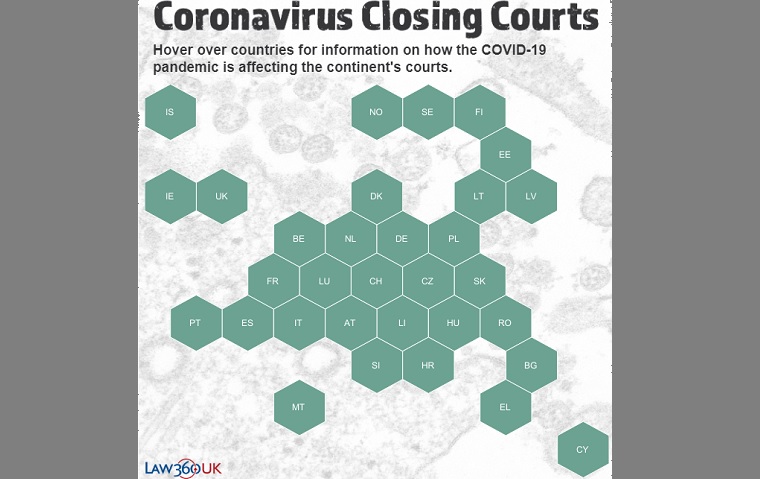 As courts across the region take measures to prevent the spread of the novel coronavirus, some are restricting access and altering their procedures.

European Court of Justice & General Court of the European Union
Both the ECJ and the General Court have partially closed their doors. The courts will hear only urgent matters until further notice. All other cases already scheduled until March 27 at the ECJ and April 3 at the General Court will be heard at a later date. The filing deadlines for all cases will not change.

Starting Monday, the European Court of Justice building, which also houses the European Union’s General Court, will be closed and the more than 2,000 members of staff asked to work from home.

The General Court will deliver all judgments scheduled for the period it is closed over two sessions on March 26 and April 2 at 11 am.

United Kingdom
» England and Wales
The U.K. justice department has decided to keep the courts in England and Wales operating normally, despite Prime Minister Boris Johnson’s new policy of encouraging “social distancing” to drive down the infection rate of COVID-19 across the country.

Justice Minister Chris Philp announced on Twitter late Monday that “courts will be operating normally tomorrow,” saying jurors not required to self-isolate under medical advice should report to court in line with their summons.

The confirmation from the justice minister came after Johnson held a press conference on Monday afternoon, calling on residents to work from home and avoid socializing, especially in London.

HM Courts and Tribunals Services department, an executive agency of the Ministry of Justice, has meanwhile published guidance for all users of the courts and tribunals in the U.K., which will be updated regularly as new advice on tackling the coronavirus outbreak is given from the government and Public Health England.

The guidance says that while the business of the courts remains open, any changes to individual hearings will be communicated directly to those affected.

The Serious Fraud Office, for example, confirmed that from Wednesday the trial of former Unaoil executives Ziad Akle, Stephen Whiteley and ex-SBM Offshore employee Paul Bond on bribery charges will be postponed until March 31. The trial began in January and the defense was due to finish their evidence on Tuesday, before both sides began their closing submissions.

HMCTS said that the courts and tribunals will remain open and that professionals, witnesses, jurors and defendants are free to enter the buildings unless they have symptoms of the virus and need to follow the government’s guidance on self-isolation. The guidance sets out the court’s hygiene policies and confirmed that its security policy has changed to allow people to bring in hand sanitizer.

Judges can also consider audio or video links during hearings where a defendant does not need to attend in person.

» Northern Ireland
The justice minister for Northern Ireland, Naomi Long, said the courts would follow the advice of the country’s Public Health Agency. Long also noted that the public “may wish to consider whether they need to attend court sittings if they do not have a role to play in proceedings,” and asked anyone coming to court to wash their hands and stay home if they are sick.

Ireland
Ireland has limited the courts to hearing only urgent cases and cases that do not involve witnesses in the next few weeks. The Irish courts service said that would allow far fewer people to be in courtrooms for those matters that do go forward. Parties can leave documents in drop boxes at the courts or submit notices of consent to adjourn civil cases by email.

The Irish Supreme Court and Court of Appeal have adjourned appeals that were scheduled for hearings until April 3. The High Court will limit its hearings to urgent matters including injunctions and habeas corpus. Extradition and bail hearings will be conducted using video links.

France
France has announced that only urgent court matters would go forward and asked the courts to cancel sessions as much as possible. The Ministry of Justice said trials could be postponed within reason and the limits on detaining individuals before trial.

Italy
Italy’s judiciary has suspended all hearings through March 22 with limited exceptions and called for the use of videoconferences or other remote hearings for urgent criminal matters.

Germany
Germany’s Federal Administrative Court said it would restrict its operations starting Wednesday until April 19. The court has cancelled all hearings during that period and will only hear urgent matters that can’t be postponed. The building has been closed to the public, but the court will continue to accept filings as usual.

The Federal Court of Justice has not posted any formal announcements about changes related to the coronavirus restrictions, but it has posted at least one cancellation for a hearing that had been set for Thursday.

Another German court has limited the scope of a landmark trial over cum-ex trades so that the trial can continue even in the face of a mass slowdown of public activity to combat the coronavirus.

The court said Monday that it was excluding four of five financial firms who could forfeit around €400 million ($446 million) in the event of a guilty verdict against the two defendants in the case, only going forward with the individual defendants and Warburg Group.

The cases against BNY Mellon, Société Générale, Hansainvest and Warburg Invest can be taken up later, if appropriate, the court said.

Finland
The Finnish justice ministry has said that some cases may be delayed and warned that it may take longer than usual to process matters in the courts.

Denmark
The Danish judiciary said it would be up to individual courts to make decisions on restricting access, but said the courts would continue to handle urgent matters but would not be able to prioritize most legal proceedings, including criminal and civil cases.

The Copenhagen district court said it would continue to handle matters with urgent deadlines, injunctions or dealing with arrests, but canceled most other criminal and civil matters.

Portugal
The Portuguese Supreme Court of Justice said March 11 that it has temporarily closed for two weeks but indicated that the move would not prejudice urgent cases dealing with imprisoned individuals.

Norway
The Norwegian Supreme Court has postponed all hearings from Friday through March 26. The move will not affect written proceedings before the Appeals Selection Committee. The court also said it would go ahead with hearings where “postponement is inexpedient.”

Iceland
Iceland said Friday it would restrict proceedings at courts throughout the judiciary, limiting hearings in most courts to urgent matters like child protection and criminal matters involving individuals under arrest or hearings where the parties do not need to appear in person.

Netherlands
The judiciary in the Netherlands has closed its courts starting Tuesday. The only proceedings that will go forward are urgent matters like arraignments and urgent family law. The courts will use video conferencing or telephone hearings wherever possible. The courts will be closed to the public until April 6 and no one with colds or fevers will be allowed to enter the courthouses.

Austria
The Austrian Supreme Court has restricted access starting Monday, asking parties to make requests by telephone or email whenever possible. Public access will be restricted to a minimum.

Czech Republic
The Czech Supreme Court said it would not completely close to the public, but urged anyone attending to reach out by phone or in writing beforehand. Starting Monday, the court said all visitors would have to have their temperature taken and anyone with a fever would be refused entry. Visitors will also have to answer questions about whether they have been in high risk areas or exposed to anyone affected.

The court encouraged electronic filings and said it would only open for in-person filing on Mondays and Wednesdays between 8 a.m. and 11 a.m.

Slovenia
The Slovenian judiciary said that submissions should be made by mail or electronically and people should avoid coming to the court except in urgent cases. For anyone allowed to attend court, people should arrive earlier to take preventative measures, disinfect their hands, and notify the court if they have signs of infection or are in quarantine.

Hungary
As of Sunday, the Hungarian courts have adjourned most proceedings except for urgent matters or hearings that can be conducted remotely. The judiciary urged parties to opt for electronic submissions, but said they could submit paper filings by mail or in boxes at the entrances of the courthouses. For any urgent matters that must be held in person, everyone must be at least two meters apart.

Greece
The Greek judiciary has suspended most trials through March 27 and suspended time limits for a variety of filing deadlines.

Slovakia
The Slovakian Supreme Court has ordered staff to work from home, saying employees could only enter the building in an urgent situation if asked by a particular judge or lawmakers.

Slovakia’s constitutional court has also limited public access from Monday until March 27. Its office in Bratislava is closed. Filings in person can only be made from 8 a.m. to 11 a.m. at the mailroom of the Košice location.

Latvia
Latvia’s Supreme Court said it would not allow visitors until April 14. Parties can file documents by email, mail, electronic submission or in a mailbox in the court’s lobby.

The Latvian courts will continue to operate but will limit hearings to urgent cases, including those that involve defendants in prison.

Estonia
The Estonian Supreme Court said that its communications may be delayed due to both the virus and its relocation. The court encouraged remote working and said anyone with symptoms or who has been exposed to the virus would not be allowed to enter the building.

The country’s council in charge of courts administration likewise encouraged courts to handle matters in writing wherever possible. Matters that require an oral hearing will either be postponed or heard remotely. Only exceptional matters will be heard in person in the biggest available courtroom to allow participants to keep their distance. The council said the courtrooms would be cleaned afterward.

Only those involved in legal proceedings or the administration of justice will be allowed into the courthouses.

Spain
Spain’s judiciary said Monday that no courts would be closed unless required by the health authorities, but suspended proceedings and procedural deadlines to focus on providing essential services.

Liechtenstein
Liechtenstein’s courts said they would continue operations to allow parties to exercise their rights and enforce claims, but took measures to cut down on risks. The courts said the only people who should be at the courthouse are those whose presence is essential, encouraged file access to be granted by phone and email whenever possible. All employees have been instructed to work from home unless it is absolutely necessary to appear in person.

Switzerland
Switzerland’s Federal Criminal Court has closed all hearings to the public but said it would inform journalists who regularly cover the court of any decisions.

Lithuania
Lithuania’s courts will only hear urgent cases such as those involving arrests or child safety matters during the quarantine period, all other matters have been cancelled. For those matters that must be heard in person, parties must be as far apart as possible and the courtrooms will be continually ventilated and disinfected.

Cyprus
The Cyprus Supreme Court said the country’s courts would suspend all hearings until the end of April with the exception of urgent matters like emergency warrants and procedures related to political asylum cases.

This list will be updated continually with new information by law360.com